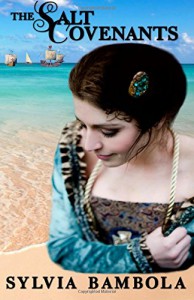 Interesting book set in the discovery of what is now North and South America. Placed in a time when Christianity was becoming more wide spread, whether by good means or bad, and in a time during such discovery. While some did mean well discovering new lands for the monarchy and for their religion, some people are just cruel as we see in Enrique. Others, as in Antonio and Isabel, they are more true to what Jesus was teaching. To be newly converted and to have the death of your sister to follow you as you're married to a new person, she was previously in an arranged marriage when a child to another Jew, and explore a new trading route must have been difficult. Especially a land in which was never known before.

I quite enjoyed the story, though there were times in which I found it tedious and couldn't bear reading. I couldn't help but feeling for our new hero. The flow of the story was nicely written with only one or two minor mistakes that I could notice; there were times when I found myself easily distracted, but that was minor and I spent more time wondering where the time went as it kept me interested. Definitely recommend for those who are interested in period pieces, especially those that involve Christianity.

I received this book through Goodread's first reads.