For Every Season: Book Three in the Amish Vines and Orchards Series 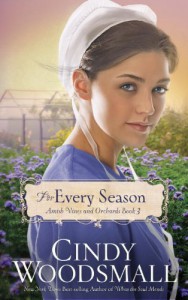 I received the book through Goodreads First Reads, who could say no to a free book!, and I'm glad I entered for this. I was always fascinated in the Amish lifestyle and I felt this was a decent representation even if it is fiction; to me it seems better than the ones on the television channel TLC.

I haven't read the first two books, but it seemed not to be a problem as the reader gets a synopsis of the previous two books in this series. While that can be a spoiler alert, I don't mind in this case, I actually appreciate the fact that they consider that there is time between readings sometimes.

With that being said I found this a bit confusing at first, so much was happening at once with so many characters, that I know if I had read the previous books, which I intend to read now, I'd understand it better. At first I didn't understand Rhoda's gift, until it was explained more as well as why some people were "okay" with it over others who were not. Once I got into the flow of things it was easier.

The characters were well developed and multidimensional. It was fascinating to watch them grow in their relationships and the farm grow. It was interesting to watch Rhoda and the brothers interact, though it was painful to see them all hurt and ultimately the orchard suffer. All had noble reasons for how they handled the situation, but it proved to be painful to read sometimes. At times I wanted to slap Rhoda and Jacob upside the head at times and say "Wake up!". Especially at Rhoda with her feelings towards Samuel.

I definitely want to find out what happens to everybody. Especially Leah and Landon's relationship, their relationship seems the most familiar to me, even with her not yet in the Amish. I also want to know what will happen to Camilla and Jacob.

I think this book was a good blend of not only romance, but drama, both romantically, about the orchard and with the Englisch, as well. The writing style was wonderful and perfectly descriptive. Didn't come off too "religious", but kept enough religion in there.