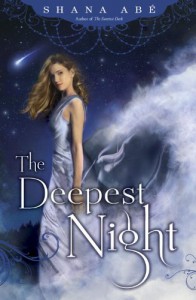 First and foremost, I received this free by a Goodreads first reads giveaway. Now that has been said and done, let's get on with my review.

When I first read, I never read The Sweetest Dark before it, so when I won it I put that on my to read list. I started reading this book and realized: I needed to read it, not only to better understand this one, but because I love the characters so much. Elinore "Lora" is a character I cared for quickly and started putting myself in her place, more quickly than almost any of the characters I've read in other books. Armand, well I already was partial to him due to his name, but I couldn't help but love him for how he felt about Lora and how understanding and patient he is. The two of them are great together, both of them on even plains, both having the same humor, and both being very intelligent; all of which I love given that Abe has written this in a time where women were held to a different standard. Love how imperfectly perfect they are. I just wish there was more Jesse in this and his perspective. I love his character so much and miss him terribly.

I love the fantasy with all the drakon and how she has her characters change from one form to another making it very plausible. The story for the most part was plausible, but there are parts how I wonder how they're going to get out of it when she returns to Iverson and Tranquilly. I'm sure it'll be explained though soon enough though. The romance was great as I've been turned off from romance novels or the like several years ago with the popular-book-series-became-movie-series, to which I might add this series, the Sweetest Dark series, is far better beyond a shadow of a doubt. There was a perfect blend of action, fantasy, history, and romance for me.

My heart did yearn to know more about Jesse, and his fate, especially with the ending as I've grown attached to him as well as Armand and Lora. I am torn as to whom I want her with, but part of me hopes it's with someone who shall remain nameless at this time. That being said, I'm wondering if now there's a NEW beau who will try for her heart, I certainly hope not given that I've already fallen in love with Jesse and Armand.

All in all, one of my favorite books. I could not put this book down, nor could I get it out of my head. It felt like it was calling me, much like how Jesse, or the other stars, called to Lora. I'm so glad I won this series and would recommend this to everyone I know who loves fantasy and/or romance. I really don't want this series to end, but at the same time I do to finish it, but with a fabulous ending. Shana Abe has made me truly want my own Star and/or my own Dragon more than ever.

This series has a way that will resonate with me for years to come. I already can tell I'm going to be rereading this book again. It's on my favorites and recommending it to everyone I know.